This game is called "Wizard's Quest" and it is a paper game. I have eveything you need to play. You can download it in Microsoft Word format or pdf. Typically you need one 6 sided dice to play this game but if you don't have one I have included a paper one that you can cut out and fold into a dice. Note that at the bottom of this page I have a youtube video that shows you a bit more about this game. 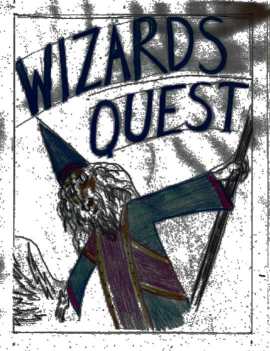 A Game of Magic

The Story: You are a wizard in training. You have been learning the ways of wizardry for several years now and it is time for your final testing. In your final testing you will have to face the dangerous and deadly Gegenhound. This is a vile creature that comes from a place called "The Gether". It looks much like a fierce wolf the size of a man. Physically it is no match for a human. But, a wizard can defeat it.

How you Play: Ahh.. the ways of the wizard are many. You will start out your adventure on the start square and make your way to the square with the Gegenhound. But, because the wizardly ways are many you have three paths you can choose. Along these paths you will pick up, discover, and learn the magic you need to defeat the Gegenhound.

Quick Note from Will: "GegenHounds" and "The Gether" are part of my upcoming novel called: "The Left Handed Sword"

Download the Game: Right Click and then select Save As, and Save it somewhere to your computer:

Which Path Shall you choose?

How to Play the Game

If you haven't already done it you should print up this document. It contains everything you need to play including:

Making the Game and things you will need: 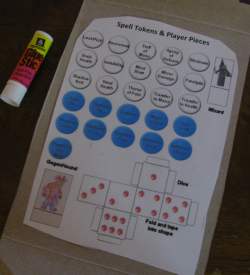 Print up this packet and glue (or use glue stick) to glue the gameboard and the game pieces to cardboard. Cereal box cardboard works really well for this and you can keep it all in a plastic bag so you don't lose anything. You will also need a six sided die to play this game. If you don't have one I have included a paper die that you can print up, glue to cardboard and fold into a dice shape.

To Start the Game place your player piece (wizard) on the start square and the Gegenhound piece in his lair.

Object of Game: To progress through one of the magic paths and accumulate magic, wisdom, trinkets and spells. Get to the Gegenhounds lair and defeat it in combat. 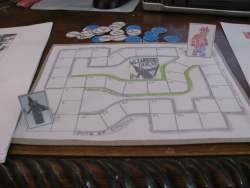 You begin the game with your player piece on the start square and move your player piece forward 1 square. At this part of the game you don't roll the dice to see how far you move. You simply move 1 square forward and then look to the rule book to see what you do. Each square on the player board is numbered or lettered. Find that number or letter in the rule book and follow the instructions. Continue moving 1 square forward, choosing your path, until you reach the Gegenhounds lair where you will do your final battle.

When following the instructions in the rule book you may have to decide on something, roll the dice to find an outcome, or take a magical item. When you are awarded a magical item take the token and place it on the combat board in the magical items section. When you are in combat with the Gegenhound you will use these items. Once you have obtained a magical item, you have learned that skill and will keep it for the remainder of the game but it does come at a cost. Most magical spells require you to expend your mana. And once your mana goes down to zero you cannot cast any more spells. So use your spells wisely. 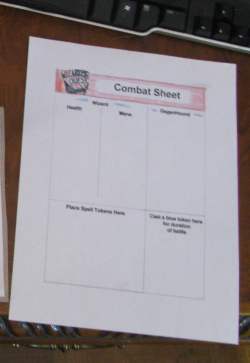 Final Combat with the GegenHound

Once you have reached the Gegenhounds Lair you begin the final battle with the Hound. This is when you break out the Combat Sheet and use it to tabulate the combat with the Hound. The combat sheet shows your beginning health, your beginning mana, and the Gegenhounds beginning health. It also is where you have placed any magical tokens you picked up along the way. And your health and mana may have changed as you progressed along your path.

Combat is turn based and you take the first turn. You can decide to either strike at the Gegenhound with your staff or use one of your magical tokens.

If you choose to strike at the Gegenhound with your staff it will not reduce or change your health or mana for this turn. Roll the six sided dice and whatever number comes up you subtract that from the hounds health. For example if the hounds health is 20 and you rolled a 3 you subtract 3 from 20 and write down 17. This is now the hound's health. And you are working him down to zero where you will win the game.

Now it is the Gegenhounds turn. Roll the dice and whatever number it rolls you subtract from your health - unless you have some kind of a spell that will modify this.

You go back and forth taking turns like this until either you or the GegenHound's health goes down to zero.

With some spells you will modify the Gegenhounds attack at you. This could take one of two forms. Some of your spells will reduce the amount of damage the Hound does. For example, if you have the blue tokens confuse, or magic shield active (you have cast them and paid the mana for them) Each one will reduce the damage the gegenhound does by 1 point. So when the gegenhound rolls you subtract 1 from the roll and this is the modified damage that is done to your health.

The Beginning Stats: To Start the final combat you should write your health down as 50 and your mana as 30. You can set the difficulty level by adjusting the Gegenhound's health

About the Spells: There are two major types of spells. The first type (white tokens) you cast and use mana but it only works for that turn. If you want to use it again during another turn you have to cast it again and use the mana again. The second type of spell has blue tokens and it is cast once and that amount of mana is used once. But the spell remains in effect and will continue to work for each turn remaining in the combat. For this type of spell you place it in the "Active Spell " box so you remember it is active. Some of the spells that will go in the active spell box are summon spells, Magic Shield, Confuse, Transform Into Wolf etc. And it is important to note that these spells can be cumulative! If you have the Barkskin Spell active this reduces your damage from the Gegenhound by 1 point every time it strikes and if you also have the confuse spell active it reduces the damage you take by 1 point also. So, every time the Gegenhound strikes the damage is reduced by 2 points!

The best way for new players to learn 4th Edition Dungeons & Dragons !
This new product makes it easier than ever to start playing Dungeons & Dragons immediately.
The D&D Roleplaying Game Starter Set introduces the complex world of D&D play to new fans in simple, easy-to-understand ways while retaining the fantastic inspiration of the full game experience. This product includes an introductory version of the 4th Edition rules, dice, map tiles, and an adventure to get starting playing right away!