The Riddle of Steel - "Crom is strong! If I die, I have to go before him, and he will ask me, 'What is the riddle of steel?' If I don't know it, he will cast me out of Valhalla and laugh at me." ~Conan the Barbarian

The Name of Conan's Sword is "The Atlantean"

The Conan Sword is of course wielded by Conan who is a character created by a writer named Robert E. Howard. 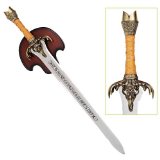 An interesting observation about the sword. It is very similar to a flamberge which was a two-handed sword from the middle ages and the unique thing about the flamberge was the wielder could hold it in the normal way and swing it with both hands much like it was a baseball bat. But the Flamberge had a special section above the crosspiece which was wrapped in leather. This allowed the wielder to choke up on it and swing it in tighter circles. The Atlantean has this same kind of structure. You can see in the picture from the movie above that conan's left hand is on the choked up section. The atlantean didn't have a leather wrapping here it was metal.

When did the sword first appear?

Conan first appeared in the Magazine "Weird Tales" in 1932 in a story called "The Phoenix on the Sword". And the sword made its first movie appearance in the movie Conan the Barbarian in 1982 with Arnold Schwarzenegger playing Conan. Here is a scene from the first movie with Conan doing a Kata with Atlaantean.

Conan the Barbarian was born in the land of Cimmeria in the world of Hyboria in the Hyborean age. Created by Robert E. Howard Conan made his first appearance in the story The Phoenix on the Sword published in Weird Tales in 1932.

Conan is famous for his physical stature and strength. He stood Six foot six and weighed two hundred pounds. He was an adventurer that traveled across the land of Hyboria encountering evil wizards, monsters and princesses. He eventually became the King of Aquilonia which was the most powerful kingdom in Hyboria.