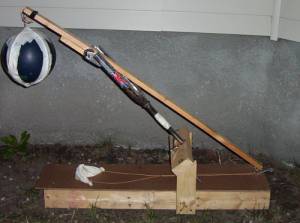 About the Bicycle Wheel Trebuchet

I have been thinking about my next trebuchet project and the thing that was utmost on my mind was the pivot point. This is the fulcrum that the whole thing swings on. In my table top project (See the table top trebuchet project) I use a simple piece of wire like a coat hanger and this was sufficient. But if I was going to go bigger I would need a nice pivot that didn't steal energy away from the swinging momentum of the machine. Poking around the house I found an old BMX bicycle in the basement and I thought "the axle would be perfect for the fulcrum of the new trebuchet". It is a ball bearing mechanism which means it can withstand a lot of pressure and it will turn extremely smoothly! So I took it apart and voila! I have the perfect axle for my new (and powerful) trebuchet.

Here is the axle of the front wheel once I removed it and all the spokes.

Now my original intention was to just use this part of the bike in the trebuchet but after tinkering around I thought that I might as well use more parts from the bike and I fussed around with how to use the fork for this axle in the design. This fork was the perfect holder for the axle after all. The only real obstacle I had to using the fork was that I couldn't mount it straight up and down because it would get in the way of the counterweight swinging. So if I was going to use it I would have to mount it at a 45 degree angle so the counterweight had plenty of room to swing. And this is what I did, and why it is so unique a design.

The size of this Trebuchet: The swing arm is exactly four feet long and the base is 40 inches long.

A Little About the Counterweight - A Bowling Ball!

Since I was thinking bigger and more powerful, and I had an axle that was really able to withstand high pressure I figured I could go with a really heavy counterweight and that is what you probably guessed is in the picture - A full size bowling ball! I just carefull tied it with rope then taped it tight and wow. This thing is heavy and it is powerful. As a matter of fact this counterweight is so powerful that it destroyed the trebuchet twice! I had to each time make a stronger build until eventually I used six inch bolts to hold the thing together.

The force of this Trebuchet 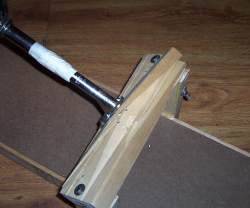 This thing generates tremendous force because of the very heavy counterweight and because the pivoting axis is so efficient. The first time I fired it off it split the board with a crack! So I replaced nails with screws and then fired it again and guess what! It split the board again! Finally I installed some serious six inch bolts and screws and that worked like a charm. On the left is a picture of the cracked mounting board.

About Making this Trebuchet 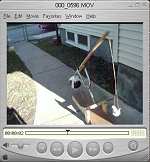 I have put together a tutorial that shows you the steps I took in making this Trebuchet. I also have a video of it firing off. This thing was way too much for inside the house so I had to take it outside to fire it off. View the MOV video

Want to get a little more creative? This book is off the hook! 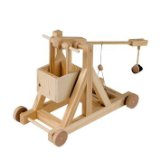 The Miniature Trebuchet by Timberkits

The trebuchet was the ultimate artillery weapon of the medieval period and early renaissance. A large and unwieldy weapon, it was typically built on-site during battle, and tuned to lob great weights - such as the carcasses of rotting horses and pots of burning pitch, over the castle walls and onto its inhabitants. Precision carved by computer controlled machinery for guaranteed fit and accurate joinery. The detailed instructions include loads of photos of each step of the construction process, tuning tips and safety notes. Included in the kit are four wooden projectiles, all the necessary components for the sling, trigger, and counterweight bucket as well as all the parts for the kit. The only thing you'll need to supply are 88 pennies for counterweight and a few simple tools - Scissors, a ruler, a utility knife, wood glue and a few rubber bands to hold the pieces together while the glue dries. Manufactured by RLT Industries