How to Make a Popsicle Stick Mini Trebuchet 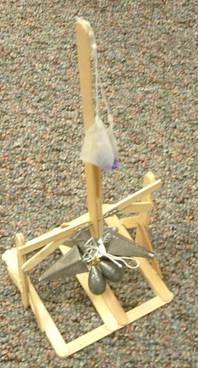 Note from Will: This awesome little trebuchet was built and designed by Tom Wilson. He also put together this great tutorial. My thanks to him for this! It's a fun and effective little project.

How to Build It:

•  Glue together six sticks in a square, "log cabin" style.

•  Glue two sticks together for strength. This is your upright.

•  Glue a half-stick to the side of the upright as shown below. It should stick out about 1/16 of an inch past the upright. This is your cross-beam.

•  Reinforce cross-beam with another half stick as shown below.

•  Attach the uprights to the base.

•  Glue the uprights in the middle of the thick sides, with the cross-beams pointing in.

•  There should be a space of at least 3/8" between the cross-beams.

•  Using four half sticks (two on each side), make braces on each upright, forming an upside-down "V".

•  Connect two full sticks with a half stick, as shown. This is the bottom of the arm.

•  Glue a full stick into the space on the top side of the arm.

???How could changing the arm length affect the performance of the catapult?

•  Get an adult to help drill two holes in the bottom of the arm, about ¼" and ¾" up from the bottom.

•  Attach the sling and the pin

•  PIN: Using pliers, bend a piece of stiff but thin wire (a paperclip works perfectly) into a sharp "J" shape.

•  While the glue on the pin is still warm, attach the end of the straight string. The sling and the looped string should hang down freely.

•  Attach the throwing arm to the base.

•  Insert the nail through the upper hole in the arm.

!! You might have to really work it to get it through. BE CAREFUL NOT TO STAB YOURSELF!

•  Using plenty of glue, attach the ends of the nail to the cross-beams.

!! If your catapult breaks, it will probably be at this joint, so use plenty of glue and make it secure! 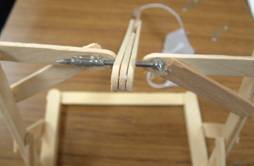 •  Tip your trebuchet forward so the bottom of the throwing arm is touching the table.

•  Insert your 1' string through the bottom hole on the arm.

Use the string to tie on the desired weights.

??How will changing the amount of weight affect your catapult's performance? Are there any risks?

•  Fold the sling in half over your projectile.

•  Pull throwing arm down to the ground, with sling lying flat on ground pointed toward base.

•  Hold sling in place with one finger. Quickly remove finger to release. 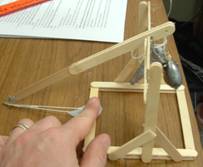 •  If sling doesn't fly over the top of the throwing arm, you need either more weight or a lighter projectile.

•  If loop doesn't release, you might have twisted sling strings, or your pin might be too long, nicked, or gunked up with glue.

•  If trajectory is too high (the projectile flies straight up or backwards), use pliers to bend pin slightly forward. This will delay the release of the sling, making for a flatter trajectory.

•  If trajectory is too low (the projectile flies downward into the ground), use pliers to bend the pin slightly backward. This will release the loop sooner, causing a higher trajectory.

Popsicle sticks have been a staple of easy and creative fun for as long as there have been popsicles. A little glue, paint or other things can really set the creative wheels in motion. Here is a book of more projects with craft sticks

Look What You Can Make With Craft Sticks: Over 80 Pictured Crafts and Dozens of Other Ideas (Craft)