An Interview with Chris Cassel, The Director of The History Channel Presents: The Dark Ages

And I have been given the opportunity to ask some questions of the Director of the upcoming History Channel film called The Dark Ages. His name is Chris Cassel and he lends us some interesting insights into the making of this film.

In particular I wanted to ask him questions that you might be interested in, and seeing as this website is all about medieval times with a big focus on weapons and castles I thought it would be interesting to find out what happens to all the weapons, armor and other stuff that is used to make a film. So my interview is entitled :

" The Making of a Medieval Film: The Dark Ages or What do they do with all those swords?" 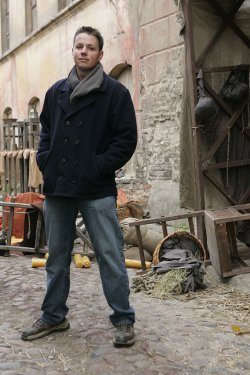 Interview with Chris Cassel -Director of The History Channel Presents The Dark Ages.

Hi Mr. Cassel, You have just completed a project for The History Channel called: The Dark Ages.

Could you tell us a little bit about this project?

It's a two-hour special that delves into the chaos that reigned in Europe between the sacking of Rome in 410 AD and the First Crusade in 1095 AD. It's a period that is usually glossed over in history books, if it's addressed at all, yet it contains some of the most compelling characters and events in world history. And this period, perhaps more than any other, really shaped the course of modern Europe and through it, the world.

The film was shot in Lithuania for The History Channel, by Kralyevich Productions, Inc. (KPI) in association with Baltic Film Services. We had a total of about 850 actors and 70 horses that participated. Our locations were mainly medieval structures and sites in the area of the capital, Vilnius . We shot it over the course of five weeks.


Were there any aspects of this project that you found particularly appealing?

In terms of content, there are a couple themes that are particularly thrilling. The increasing power of the Catholic Church, which filled the void left by the defunct Roman Empire , is one. The Empress Theodora, a burlesque dancer who essentially slept her way from poverty to the height of power, is another. Then there's the plague that devastated the continent in 542 and wiped out 25-50% of Europe 's population. This one was as bad if not worse than the Black Plague of the 14th century. The rise of the Muslims as a military power and their efforts to invade Europe . Charlemagne as the most illuminating figure of the Dark Ages. The Viking "terrorist" attacks that left the continent in perpetual fear. There's so much "juice" here.

On a personal level, the chance to direct a film on this scale, and to work with such a supportive and professional crew was a thrill.

One of the challenges of making a film like this is the dual goal of researching the facts then showing these facts by filming realistic scenes. What kind of challenges did this blending bring up for you?

This challenge comes into play most in the art direction and casting of the film. Choosing accurate costumes, props, locations, and actors required meticulous research. I worked with a great art director, Lina Geciene, and costume designer, Rasa Taujanskiene, who consulted hundreds of paintings and drawings from the period to inspire their designs. They were very dedicated to accuracy. In fact, at several points when I wanted to stray from the historical record, they didn't hesitate to take me to task and keep me honest.

Another challenge was that because this is a fairly "Dark" period of history, research on the "details" wasn't always available. I wanted each scene to reflect the spirit of the true events and characters, and that often required reading between the lines of our available research sources - period writings, modern scholarly accounts, etc. - to paint a picture consistent with what we know about the time.

You cover a 700-year period and that means a lot of different types of people, weapons, armor, and landscape. You show us Barbarians, Vikings, Romans, Knights and many more characters from this period. What kinds of challenges did this spanning of time present to you as a director?

Having such a variance of characters and ages required a very diverse set of locations that evoked different time periods and places. Luckily, Vilnius and its surroundings contain architecture spanning from medieval times to the present, and had a good diversity of both exterior and interior locations, so we could avoid repetition of settings. Also, the weapons and armor changed across time periods and armies, and luckily we had a whole warehouse full of weapons available to us. Many had been used on prior productions, some where made exclusively for this one. Lithuania is a busy filmmaking center, and specializes in these types of historical recreations. So they had the resources and know how to supply us with the different types of weaponry we needed. Same with costumes. Many were available in Lithuania , and some others were shipped in from a studio in Prague .


The film was shot in a lot of different locations. Were there any particular locations, or maybe castles, that made a real impression on you?

Trakai Castle is the major Lithuanian landmark. It's equivalent to their Statue of Liberty in national fame. We shot many of our scenes there, using different parts of the castle. It was a large structure with a lot of different nooks and crannies that worked well for a variety of scenes. It's also in a beautiful setting - surrounded by lakes and forest. It feels very enchanted. And for further inspiration, one of its wings houses a medieval torture museum, which preserves some of the instruments of torture that were used by its medieval rulers.

When Making The Dark Ages you used a wide variety of weapons, armor costumes and all sorts of realistic things that we see in the film. How are these resources gathered? Do you have a team of people that make these things?

We had a number of prop masters who either made, rented or found these items. As I said earlier, many of them were pulled from a local prop house on the studio lot.  Some were shipped in from other parts of Eastern Europe , and quite a few were also made especially for our production based on the best research available. 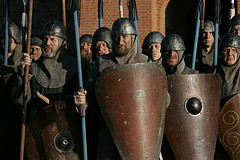 They all live on to fight another day in some other production, as they are absorbed back into the prop houses from which they came.  Those made for our production are sold or traded to the same prop houses in exchange for discounts on the rentals.

Thanks for your interest.  Enjoy the show!

My thanks go to Mr. Cassel for taking the time to answer some questions. And can you imagine how exciting it must be to take on a project like this? This isn't just a film, it is a film about what really happened during one of the most difficult periods in our history.

If you want to learn more about this film I have put together some interesting stuff including information about some of the major characters in the film. Mr. Cassel mentions some of them like the Empress Theodora and Charlemagne.

And if you were hoping, much like I was, that maybe when they were done making a film like this that they either give away the swords to fans or sell them cheap I am sorry to disappoint you but, like Mr. Cassel says: They do live on to fight another day!

The History Channel Presents The Crusades - Crescent & The Cross

Interested in learning more about the Dark Ages? The crusades were in the latter part of the period. The History Channel has created a film about this.