Fantasy Swords in the Movies

The movies have a long and illustrious relationship with swords. The two things go very well together. Movies have long focused on the hero and his weapons. And being a visual medium the artisans of movies have created some astonishingly beautiful swords. Often times the sword makers are given some free reign to create something that was only previously described in a book or novel and our first sword is just this. It is the sword of Conan the Barbarian. The name of his sword is "The Atlantean". It, and its wielder Conan were created by Robert E. Howard.

The Riddle of Steel - "Crom is strong! If I die, I have to go before him, and he will ask me, 'What is the riddle of steel?' If I don't know it, he will cast me out of Valhalla and laugh at me." ~Conan the Barbarian

An interesting observation about the sword. It is very similar to a flamberge which was a two-handed sword from the middle ages and the unique thing about the flamberge was the wielder could hold it in the normal way and swing it with both hands much like it was a baseball bat. But the Flamberge had a special section above the crosspiece which was wrapped in leather. This allowed the wielder to choke up on it and swing it in tighter circles. The Atlantean has this same kind of structure. 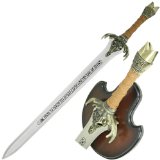 You can see in the picture from the movie above that conan's left hand is on the choked up section. The atlantean didn't have a leather wrapping here it was metal. Conan the Barbarian Sword of Crom

When did the sword first appear?

Conan first appeared in the Magazine "Weird Tales" in 1932 in a story called "The Phoenix on the Sword". And the sword made its first movie appearance in the movie Conan the Barbarian in 1982 with Arnold Schwarzenegger playing Conan.

Conan: The Ultimate Guide to the World's Most Savage Barbarian

This official replica of Longclaw from HBO's Game of Thrones has an unsharpened blade of stainless steel polished to a mirror-like finish. The base of the blade is stamped with the production number of the sword. The crossguard is of brushed steel and the dire-wolf's-head pommel is of painted cast metal inset with two red eye stones. The crossguard is tightly wrapped with finely-stitched black leather. Comes with a certificate of authenticity and a wall-mounting plaque of silk-screened wood bearing the oath of the Nights Watch. Mounting hardware is included.

Born in the Highlands of Scotland in 1518, Connor Macleod is immortal. When he is wounded in battle but does not die, he is banished from his village. He meets another like himself, Ramirez, who teaches him swordsmanship--the only way to kill another immortal is to take his head--and the ways of the immortals. Modern-day New York is the location of "The Gathering," where Connor and the few remaining immortals must battle to the last for "The Prize." 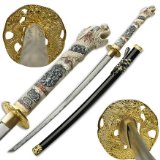 This awesome gear from Master Cutlery is made of quality materials to ensure the best use of your item. Don't settle for anything less. Value items priced up to 90% less than other name brand goods.

This is one of the best movies ever made and it showcases a lot of different weapons through a lot of different battle scenes. The most famous weapon is the big two handed flamberge that Mel Gibson wields. you can see it in the movie cover pic on the left

Original William Wallace #1 Medieval Sword One of the unique features of this weapon was the extra sheathing above the crosspiece (it covered part of the blade) This served an important purpose. When the wielder had lots of room he swung the weapon two handed like a baseball bat. But when the combat got in close and there wasn't room to swing it he could place a hand on the choked up leather section and wield it in a more controlled fashion. Note From Will: I own this sword! You can Read my review of it and see more pictures of it here: My William Wallace Sword

This is a trilogy of movies with Wesley Snipes as a vampire hunter. His weapon is very stylish and is modeled after the katana. It has the added booby trap of having blades that will sever a user's hand if a safety button is not depressed. This insures only Blade can wield it. 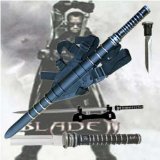 Blade sword of the Daywalker

Gladiator (2000) This movie is a strong pre-cursor to the now popular 300 movie. The roman era had its own unique style of weapons and here is a look at the sword of Maximus (Russell Crowe) 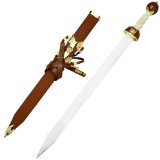 There are of course many swords and other weapons in the Lord of the Rings movies. And these movies have done much to forward the hobby of collecting swords. But of all the weapons in the movie one rises above them all. It is the small sword of Frodo Baggins which was given to him by Bilbo Baggins. The sword is of course "Sting" and it glows when an Orc is near. This sword has magical powers. If you want to learn about some of the other swords in the Lord of the Rings movies I have put together a whole section devoted to these weapons. You can learn the names of the weapons and who wielded them. Lord of the Rings Swords 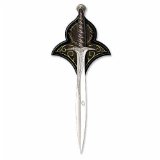 A blockbuster movie that has done a lot for the art and craft of the Roman era as seen by the modern movie goer. There were several famous weapons used in the movie and none more famous than the Gladius - a standard sidearm of the Roman soldier and used only as last resort when the battle got in real close. The lack of a crosspiece showed the limitations of metal working from this period of history. It wasn't until centuries later that the sword changed dramatically as metal working and blacksmithing technologies improved. 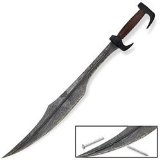 Make your own stand against the Persians! This is an exact replica of the sword carried by the famed King Leonidas and his 300 Spartans at the Battle of Thermopylae in 480 B.C. The heroic performance of these fierce warriors is remembered even today as a symbol of courage against overwhelming odds. We offer you the opportunity to relive the legend and to experience the power of this mighty sword. This sword measures 34 1/2" overall and breathes strength. The 26" hand forged blade is heat tempered from solid carbon steel and is nearly an amazing 1/2" thick. The leather wrapped handle is contoured and surrounded by the distinctive extended guard and pommel. Relive the history of the Spartans with this sword in your hand! 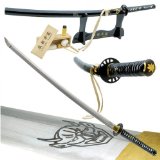 Handmade Kill Bill Bill's Samurai Katana Sword Leather 2nd Generation Hand Made Fully Authentic Kill Bill Katana of the Bill. The blade of the steel has been hand crafted of high carbon steel. Bill's Devil Face has been carved into the scabbard. The handle core is wooden with a real ray skin wrap. A black leather cord has been tied over the ray skin.