Swords, in a time gone by were a life or death decision and everything about them was designed for function. But today the sword has been replaced by the firearm as a means of protection and war. So the sword has evolved into an art form. And that means that the design of swords has gotten very creative. Now they are made for aesthetic pleasure.

Swords can fulfull a fantasy that people have. Living in modern society the challenges of warfare and hand to hand combat have been all but eradicated. No longer do you have to don your sword before you go into the village at night. But the appeal and the power of swords still remains.

Now people collect and use swords to get the fantastical feeling that they can bring. Or they don them during role playing events. Who doesn't enjoy holding a magnificent sword and pretending to be a knight or a king?

The Design of Swords has taken many paths

There are two distinct traits that we will examine. The first trait is the alignment of the sword wielder. Is he good or is he evil? The second trait we will look at is the wielders wealth. Does he possess riches?

This is an Uruk-Hai Chopper. What does it say about it's wielder. We can construe a couple of important facts. First of all, the shape of the blade is menacing. It is a brutal weapon that can be used to slice an opponent but it also can be used to swing and stick an opponent. What happens after the swing and stick? You can almost visualize the bent point of this sword sticking firmly in a foe and holding tight. The wielder then can pull the foe in nice and close for that personal in fight. This unusual shape definitely denotes a wielder that is evil in alignment. It almost gives a shout of glee at the in close and personal carnage.

What else can we construe from this sword? Well it is an extremely plain sword. There are no frills. It is strictly down to business. That denotes that the wielder does not possess riches.

So summary of this type of sword: Evil and Poor 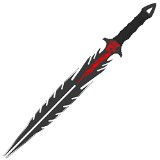 (Dragons Tongue Warrior Short Sword )Here is another nasty sword. It has a very unusual blade serration. This configuration promises that the sword will go in a foe and will make a real mess when coming back out. It screams evil! The objective of this sword is to cause maximum damage! It is also a sword that is finely wrought with lots of ornate design around the hand guard and the pommel so this says Riches!Who would wield this sword? A sword like this would be wielded by an evil lord. Someone who has riches and is in command of many minions. This sword says "Fear me and Respect me for I am evil and powerful".Summary of this sword: Evil and Rich

Fantasy Swords that are of a good alignment

This is a very simple and straight-forward sword. There are no frills and this says "I don't have a lot of money but I managed to get a sword that I can use so I will use it for good!" This is a traditional Viking style sword. Function over form is the theme. Viking Sword 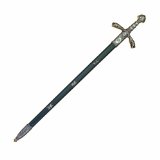 What does this sword say? It is made of rare materials (Silver and Gold) and it has ornate carving on the cross guard.

This sword definitely says I am good and I am wealthy. The shape of the handle is reminiscent of the cross. This denotes a religious tone which reinforces the theme of good. Leadership and wealth in this sword. Richard The Lion Heart Sword of the Crusades 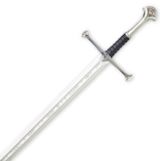 This sword makes a special statement. It is obviously the weapon of a person who would only do good. But even though it fairly simple and straight forward is has an extemely elegant design. This sword says "I am good and I have money but I choose not to flaunt my money." Anduril The sword of King Elessar