Catapults You can Make

How Not To Build A Catapult

Well, one of the projects I have been wanting to do is make a catapult in the vein of a Mangonel which was a Roman style catapult that used twisted ropes or fibers as its source of power. They didn't have rubber bands or springs back then. But they did make good use of the power that can be generated with the twisting of fibers. So I thought I would make my own variation of this catapult. 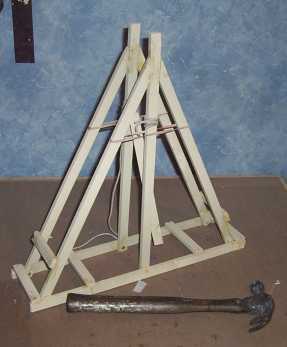 You can see from the picture that it is actually not that bad. It seems like a pretty straight forward and almost attractive catapult! I did have a lot of fun making it and it stands about twenty inches tall.

And it actually does work, just not that well.

The basic concept is that the swing arm, hanging in the middle is simply threaded through a small rope and if you turn the swing arm several times it builds up quite a bit of torque - and it does. Then when you release it the arm swings pretty quickly -and it does.

This is the basic concept of the Mangonel, just twist some rope to get a nice pressure of kinetic energy built up. 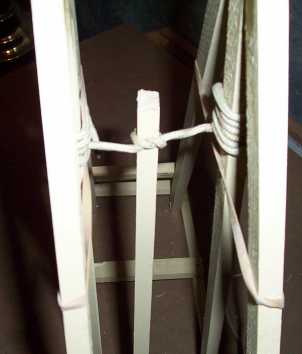 This image shows the twisted rope and how it tends to twist the swing arm. You can also see here that as this rope twists it brings the two sides of the catapult closer together. It won't take many uses of the catapult before these side pieces are weakened to the point of breaking.

How could I fix this?

There are a couple of things I could do and I really like the concept of the Mangonel which uses only rope as propulsion.

I could use metal to reinforce the sides. Maybe some kind of a U shaped bracket would do the trick. And I could desing some kind of a swing arm where the twisting of the rope doesn't twis the swing arm.

Maybe I will work on this project some more in the future or maybe I will drop it for a more conventional style Mangonel.